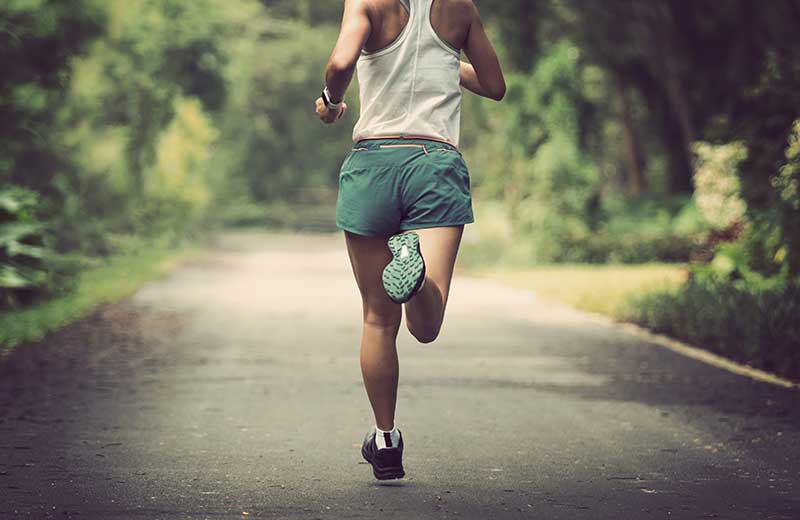 Warby looks at me with panic-widened eyes. Her shoulders are lifted up towards her neck, her knees locked and shaking. I settle a hand on her shoulder and calmly look her straight in the eye.

“I’m serious, Coach! I’m going to throw-up!” she repeats, louder this time, interpreting my non-plussed response to her declaration as disbelief.

“You may,” I shrug my shoulders. “It happens to some at the start of a race, to others in the middle, and to quite a few at the end, but,” I continue, “if you’d rather not see your food a second time, then you need to breathe. Not the shallow, quick breaths that you’re taking now, but a long in-breath, yes, like that—all the way into your belly, hold for a few seconds, and then back out, making the out-breath a little longer than the in-breath.”

Within just a few cycles of this type of breathing, Warby had dropped her shoulders, stopped shaking, and was able to focus on the start of her race rather than whether or not she was going to lose her breakfast.

I didn’t have the time to explain the intricacies of the stress response, nor did Warby have the attention to listen, though it was the topic for several of our training runs together in the following weeks. All that she needed at that moment was a way to calm her body’s autonomic nervous system in order to move down a notch or two from its current level of high alert to a lower level of heightened arousal … hopefully the perfect amount to propel her through her 3-mile race.

The Chinese have a word called “Xin” that is often defined as “Heart-Mind.” A doctor who specializes in rehabilitation for those who have suffered traumatic brain injury introduced it to me. He uses this concept in his treatment plans, finding time and again that the key to a successful recovery lies as much with the mind as with the body.

The question of how the mind and body work together has endlessly fascinating answers and has launched countless studies, articles and theories. In Warby’s story, her physical responses were a result of her thoughts about the race, and in an endless loop of affectation, her physical responses heightened her worried thoughts, which increased her physical responses … until she was certain that breakfast, and the 8 oz of water she’d gulped 15 min prior to the race, would momentarily be expelled back into the world from whence they came.

As someone who has spent more than half of my life studying, both formally and informally, the complexity and connection of mind and body, it makes perfect sense to me that Warby could consciously change her physical response by using her mind to focus on her breathing, and it was perfectly fulfilling to me to be able to help her to do so.

I watched as Warby sprinted around the final turn of the race and onto the straightaway, straining with all that she had for the finish line. She crossed triumphantly, thrilled with her time.

“Coach!” she exclaimed, throwing herself onto me with a hug, “I did it!”

I don’t know whose smile was wider, but I do know that the gift Warby gave me that day of trust and appreciation is the very most valuable kind of gift and far more precious than the trophy Warby received later that day at the awards ceremony.

Every once in a while, I find that Life gathers up all of the disparate parts of my varied experiences and weaves them into a cohesive assignment that, it seems, was designed just for me.

The job of coaching middle and high school girls’ cross country and track teams was one of those things. Coaching served to knit seemingly unconnected moments—my college roommate taking me out on my first run, my graduate degree in psychology leading me to a certificate in biofeedback (a mind/body healing technique), signing up for one marathon and then another and another, inheriting the coaching of the track team at our elementary school—into a perfect combination of experience for a job I loved.

Seasons come and go, in running and in life. As I readied my first-born for college, I realized that the season for me to coach at our local high school had come to an end. I needed time to devote to my own teens in the few years left before they flew the nest.

I felt sad at the thought of not seeing “my girls” and fellow coaches nearly every day, all year round. I took a deep breath, down into my belly, and let it out slowly so that my out-breath was longer than my in-breath. I dropped my shoulders, unlocked my knees, relaxed my jaw and waited amidst the momentary calm for my next “assignment” from life. And, in the magical way that life unfolds, it has.

By: Erin Swanson, M.Ed. Under Pressure Teachers—this might ring a bell. Many of us go into the...

END_OF_DOCUMENT_TOKEN_TO_BE_REPLACED

Create a Resonant Sound! The Music of a Joyful Mind

By: Joel Karabo Elliott She is always there, deep within us all . . . Music!  Music presents...

END_OF_DOCUMENT_TOKEN_TO_BE_REPLACED

How to Cope With the Emotional Labor of Teaching

END_OF_DOCUMENT_TOKEN_TO_BE_REPLACED

How To Ease Report Card Writing Stress with Mindfulness

By: Erin Swanson, M.Ed. On a crisp November evening, I sat huddled in blankets at my kitchen...

END_OF_DOCUMENT_TOKEN_TO_BE_REPLACED

How To Teach Students to Self-Regulate and Navigate Conflict

For teachers, supporting students through conflict can seem like a full-time job. How do you focus...